I realize that I have not been posting long enough for a Guest Blogger, but this project was so cute and one that I will most likely not create, so I had to do it. My good friend Amanda is as crafty as I and we love to share with one another our creations. As soon as I saw her Dad's Dad Wreath, I thought about my blog and asked her to send me a write up. Below is Amanda's project overview.


For years I wanted to make something out of my Dad's ties.  As a dr, he wore a tie everyday to work and was well known for wearing crazy (I might even say ugly) ties.  He was the only man that could get away with wearing stripes, plaids, polka dots and florals all in the same outfit!  But, I loved that about him and I have so many memories of his ties.  Especially the holiday-themed ties.  I finally decided I wanted to make a neck tie wreath, but put if off because I didn't want to cut the ties.  My husband finally convinced me that the ties were only hiding in a closet and that they deserved to be crafted into a memento.

So, the Father's Day necktie wreath was created.  I searched pinterest and the web for ideas and settled on a combination of many.

I first organized my ties and laid them out in the order I wanted them on the wreath.
Next I wrapped a few ties around the wreath to figure out where I wanted to cut them.
I measured 17 inches from the bottom of the tie.
I marked with chalk and cut with fabric shears.
Next I cut triangles out of the poster board and hot glued them into the bottoms of the ties.  This makes them stiff so they won't be floppy on the wreath.
Next I started wrapping the ties around the wire wreath.  I would wrap them around once and hot glue them so they were attached to the wreath. Don't glue any part to the wire itself.  You will want to be able to move the ties around the wire as you get more ties on.
Next wrap the ties until you get about 4-5 inches hanging off the wreath.  Hot glue to secure.
Continue to do this until all the ties are attached.
I then used the the last tie to create a bow.  You don't have to, but I preferred it.
I felt like the wreath needed more, so I decided to add wood letters spelling DAD.
I painted the letters white - primarily the sides.
I had a random piece of scrapbook paper left over from a project that never happened.  It was perfect since it had ties on it.
I cut out the paper after tracing the letters. (Make sure the letters are backwards and the paper isn't upside down!)
Next I used Mod Podge for the first time.
I coated the wood letters with a layer of Mod Podge and then attached the cut out scrap paper.  Let dry.
Once dry, I applied a top coat of Mod Podge.  Let dry and apply a 2nd top coat.
Once dry (overnight), I hot glued the wood letters to the wreath.
I Love it! 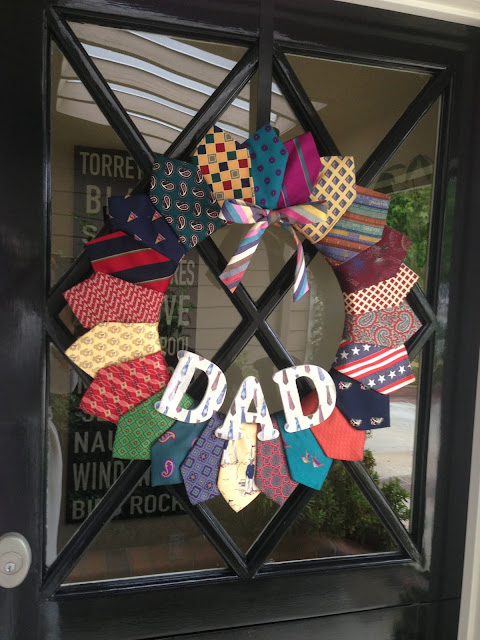 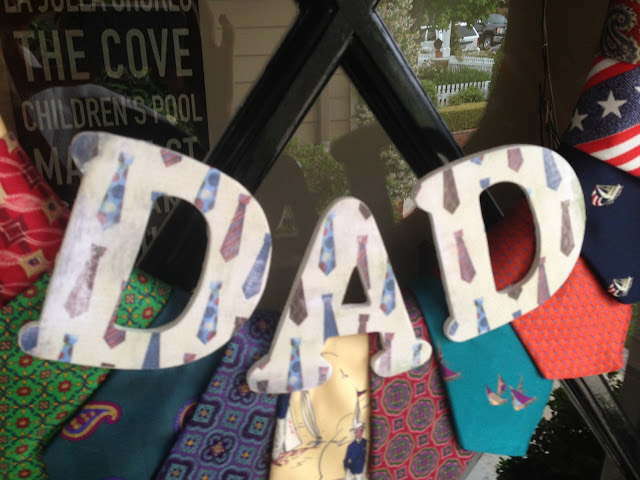 Ashley
Hi! My name is Ashley and I am a Crafty Mama. I am crafty, not artsy as I like to say. And I was a Crafty Mama even before I had my son. I love doing crafts and since I am less artsy than crafty my focus has always been more about kids crafts. I also have no patience so I am not very thorough which adds to the crafty side. I collect containers, art supplies, etc always with a mind to using it later in a project or for a project. This blog is a way for me to track what I am doing, what I love, who I admire and to get me to start writing again. Since I am a full time mommy and a full time employee, I needed a creative outlet just for me.